On a quarterly basis, BIT recognizes staff in honor of their outstanding performance and dedication to our agency, state government and the citizens of South Dakota. This time around, we gladly recognize:
Al Peterson- Data Center 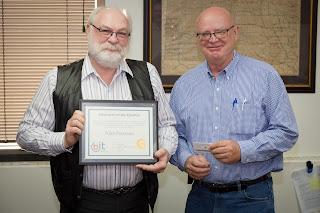 Alan (Al) Peterson is a technology engineer level 4 for BIT.  He has been a member the BIT (CDP,IPS,I\S) team for 39 years(yes, 39!).  He started working at the State in 1976 as a COBOL programmer for Central Data Processing.  (For those reading this who are too young to have worked with COBOL, rest assured Al arrived with the newest and latest programming skills).  In 1979 he joined a team researching mainframe database technologies.  That team picked the technology that would become the State’s first Database Management System (ADABAS from Software AG).   Some of that team eventually formed a Database Administration Group supporting the new technology with Al as one of the founding members.  He has remained a valuable member of that team since 1979.
Al’s current duties span technologies used on both Windows and the State’s IBM mainframe.  These include Natural, Natural Security, Webmethods, EntireX and Natural Engineer.  His backup duties include Trim, Auditre and Predict.
Most recently Al has been integral in the implementation of Natural Engineer. Natural Engineer is a key tool that will provide structural analysis of the DSS Automated Eligibility (DSS’s largest application).  Al is also key to the success of the State’s SOA toolset (Software AG’s Webmethods) implementation.  His instinctive insights and inputs in every area of his duties enable everyone that works with Al to be more successful as he’s always willing to share and teach.  Those who have been in BIT for many years may remember the “rigors” of the ABABAS File Design Review process and feedback process and the helpful feedback that was so often forthcoming from that process.
Al is definitely a team player and his years of experience and skills make him a valued member of the BIT team.  He always strives for the success of the organization as his top priority.
Al grew up on a farm near Artesian, SD.   He is an alumnus of Dakota State in Madison and is a lifelong resident of South Dakota.  He is an avid hunter and fisherman, enjoys ATV trail rides in the Black Hills, and his pontoon boat on the river.  He also likes to try out BBQ and grilling recipes, always looking for that perfect marinate/seasoning/grille combination.  More recently he has been enjoying time with Denver, his grandson who has more hair than Al.
Linda Plett- Telecommunications
Linda is a technology engineer and has worked for BIT for almost 19 years.  She is a member of the IT Asset Management team.  She began her career with BIT at the Help Desk and was instrumental in the implementation of the HEAT call tracking system.  Through this implementation, Linda became more knowledgeable on SQL server and as a result moved from the Help Desk to the Database group.  In 2013 when BIT started looking at IT Asset Management products, Linda represented the Database group on the project.  She took great interest in reviewing and learning about the different vendor packages and when LANDesk was purchased, Linda became part of LAN Services and the ITAM team.  Linda does most of the backend database work for the LANDesk software.  She also works with state agencies by presenting to them their installed software, what software they have purchased and combing the two so they know where stand with software compliance on Microsoft and Adobe products.  Linda has learned a lot about different software licenses, the ins and outs of what can and cannot be done with each of the different software packages.  She has been very proactive in working with LANDesk to pass along ideas and resolve issues we have experienced with their software. She sometimes gets the impression that we give LANDesk ideas on how to improve their software.
In her spare time, Linda has enjoyed doing crafts and is very talented in doing floral arrangements and making jewelry.  She also likes to travel – has been to Scotland, England, Whales and is planning a trip Ireland.
Linda has 3 sons – Trevor, Denver and Jeremy, two daughter-in-laws – Natasha, who works for BIT Development in Rapid City and Kori, and a very special granddaughter – Katia – who is the light of her life.
Elise Bunkers- Development 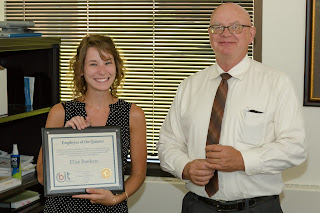 Elise is a software engineer level 2  for the development department of BIT. Elise’s day-to-day responsibilities include the primary support of several DOT applications. She originally created BIT’s Application Portfolio Management system which is used to track information about BIT’s 800+ custom applications. Elise was one of the first BIT developers to incorporate responsive web pages. This allows the displayed website to auto-resize depending on the viewing device (desktop, tablet, phone, etc.).

Elise recently worked on a team to develop a system that included both a web interface along with a mobile collection module. Users are able to inventory, inspect, photo, and geo-locate items using a tablet. The information is collected in the field using a mobile device, and then viewed through a browser.
Elise moved to Pierre in May of 2013 and started working for BIT as a summer intern. The summer intern position turned to into a full time position and she has been working for BIT ever since.
Elise grew up in Del Rapids and graduated from Dakota State University in 2013.
Even though she doesn’t catch many fish, she likes to try whenever possible. Hiking is another way Elise is able to enjoy the outdoors. While indoors, she likes to read, knit, and watch various types of movies.
Randy Sullivan- Administration 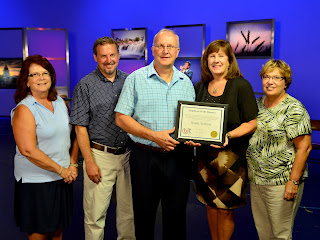 Randy Sullivan, BIT Purchasing Agent, has been with State government for 39 years.  He has been a vital member of the BIT Finance Team since 1996.  His career with State government began in 1976 when in worked as an intern at KUSD Radio and TV.  He was hired as a TV on-air operator and production assistant and then transitioned to TV production full-time.  In 1978 he took the Purchasing agent/Property Management Officer position for SDPB & KUSD-TV and Radio.
Randy’s primary role with BIT has been coordination of technological, broadcasting and radio equipment purchases for all divisions of BIT.    He is also tasked with grant purchases, Statewide BIT inventory, surplus property, writing local purchase orders, working with OPM on the Statewide Procurement Management system, reviewing and updating the BIT accounting, purchasing and contract databases.  He has been involved with the LANDesk project that is currently underway.  His software and hardware data for BIT purchases has been extremely instrumental in resolving some of the issues that were encountered.
Randy is native to SD.  He was born in Mitchell and grew up in that area, along with his 9 brothers and sisters in that area.  He received his degree in Mass Communications in 1976 from USD (go Yotes).
Randy married to his lovely wife, Sandie, in 1987.  He is very involved with the Lions Club, meals on wheels, and the Vermillion Coalition Against Domestic.   His 2 children and 2 grandsons keep Randy on top of his game!
Again, congratulations and thank you all for your efforts and for all the years of dedication of service to the State—BIT looks forward to many more!