There has been a Civil War Monument on the Capitol Grounds for over 95 years, yet many people are unaware of its purpose or why it was put up.  It was these questions which led David Smith to begin a quest to find out about the the monument’s history.   David was born and raised in Pierre, SD, and after high school served 8 years in the United States Marine Corps, returning in 1992.

David’s interest in the monument started while driving around Pierre in November of 2013 when he decided to visit the monument for the first time one evening.  The simple monument, he observed was of a Civil War soldier.  The only information at the monument site indicated it was erected in 1918 and dedicated to the Defenders of our Nation.  As chance would have it, he had a meeting with the State Historical Society to discuss a document archiving project.  After the meeting, he inquired where he could find additional information on the monument.  Matthew Reitzel showed him a folder on the monument which included a photo from the original dedication on June 1, 1920 along with the original dedication transcript.  Matthew and David used their shared interested in the monument to start a restoration project on what they found out to be was the first monument placed on the Capitol Grounds.  They wanted its story and purpose to be an ongoing reminder to all generations of the sacrifices of war and the cost of freedom.  They thought it was unfortunate that the original purpose for the monument had been forgotten over the years.

As the project progressed, Matthew and David worked with the Governor’s Office and BOA to gain support and approval for the restoration project.  The goal was to add walkways, benches, and lighting as an effort to connect the Civil War monument with the other war memorials on the Capitol complex.  Thanks to the efforts of the Governor’s Office, State Historical Society, Office of State Engineers, Capitol Complex Restoration and Beautification Commission, Buildings and Grounds staff, David Smith, and Matthew Reitzel; the monument site has been improved and will be a focal point for visitors to the Capitol.

David recommends you stop over and check it out since the monument has been restored to its place of honor on the Capital Grounds.  David said they also plan to post the information they compiled on a local historical website that provides historical information on other sites around Pierre.  In the near future, they plan to tie this site into an website permitting visitors to have access to historical information such as the original program transcript, history of the monument as well as other historical documents and pictures.

The monument was erected through efforts by the veteran’s group called the Grand Army of the Republic (GAR).  A number of the veterans of the Civil War came to the Dakota Territory to settle after the war and were part of the GAR.  The GAR had a national organization as well as local groups.  These groups met together at annual encampments in different cities in South Dakota to talk about patriotism, reminiscing about their time in service and remember those who had passed.  They annually decorated the graves of the military on Decoration Day (which later became the national holiday we know as Memorial Day).  They also assisted in establishing the State Soldiers’ Home in Hot Springs, SD.  When they approached the State about building a monument, the State gave them $10,000 to complete their goal.  The granite came from Vermont and it was carved in Nebraska.  The monument was dedicated on June 1, 1920 with the GAR National Commander and Governor Norbeck participating in the ceremony.

The Civil War Monument will be rededicated on Monday, June 1, 2015 at 11:00 am.   The monument site is located on the triangle section of land south of the Governor’s Mansion.   The plan is to reenact parts of the original dedication program.   The Sons of Union Veterans of the Civil War dressed in period correct uniforms will conduct their official rededication ceremony as part of the program.    Everyone is invited to attend. 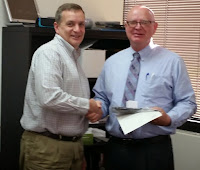 Gary Goeden has been with the State of South Dakota for 30 years. He is the Point of Contact for Department of Human Services, Department of Social Services, and the Office of the Governor. He keeps current on the agencies’ key processes, critical applications, and active projects. The state agencies he assists and the BIT PMO team value his expertise and professionalism. 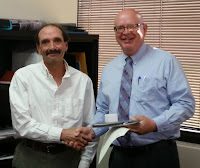 Bryan Dockter has been with the state for 30 years. When he arrived at the state, Bryan worked in BOA delivering materials and mail. His diligence and attention to detail and delivery schedules brought him quickly to the attention of the computer room management who offered him a position. It wasn’t long before Bryan was a Third Shift Supervisor in the Computer Room, a position he would hold for more than ten years until moving to the position of Production Control Supervisor on the day shift. After a few years on the day shift, Bryan was invited to move into the mainframe security world as a RACF (for those of you whose geek roots don’t reach as far back as the mainframe, RACF is the Resource Access Control Facility for the mainframe) and door security administrator. Bryan remains in that position today, performing an important set of security and access functions for our clients and his co-workers. 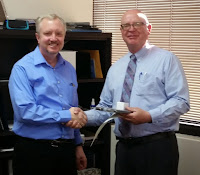 Roger Reed has also been with the State of South Dakota for 30 years! He was first hired as one of the first PC employees in the state working on PC programming. Eventually, Roger landed in the Standards group which he says has proved to be quite a challenge. Today Roger is a Network Security Engineer. Rogers’s duties at BIT include helping out with daily cell phone issues and work requests. He also keeps the Incident Response Document up-to-date and is a valued member working to rewrite the BIT policy documents. Thank you, Gary, Brian and Roger, on your 30 years of dedication and commitment to the State of South Dakota! Keep up the great work!

As you may have recently noticed, your Microsoft Lync Basic now bears the name Skype for Business Online.  This is a very recent development wherein this Microsoft product is now sporting a new brand.  This was an update that BIT originally thought we would be able to control rolling out to State users, but that was not the case.  Microsoft’s automatic update process is doing it instead.

The most noticeable differences are the new interface appearance, logo and color scheme.  All other functions of Skype for Business will be the same as the previous Lync version.  We are sorry for any inconvenience or confusion this unexpected update has caused for your agency and employees.

The below image gives an example of the old Lync interface (left) compared to the new Skype for Business interface (right). 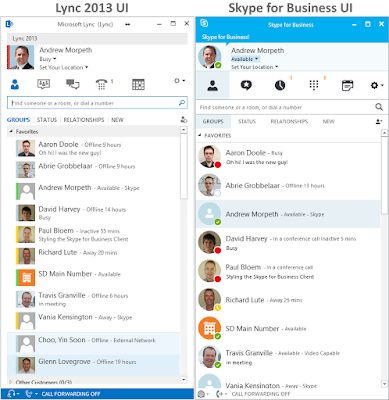 Outlook Web Access (OWA) is the state’s browser-based email client. Outlook Web App lets you access your state email from almost any web browser.  The OWA logon screen you are used to will change on the evening of May 12th around 9 PM. If you access your email from a web browser after that time, the login screen will look different (see below screenshots).   However, after you log in, it will look and function just as before.  No other changes are being implemented. 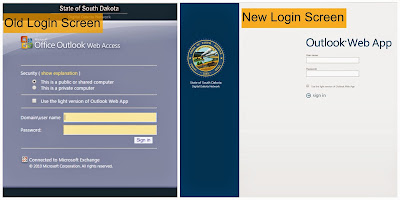 For additional information on any of the topics covered above, please contact your agency’s BIT Point of Contact.

In April, BIT/DDN and the K12 Data Center presented their annual “State of the DDN” presentation at the Technology and Innovation in Education conference held in Rapid City. The TIE Conference is an annual meeting for classroom teachers, network administrators and educational administrators.   The goal of the conference is for educators and administrators to share strategies, methods and best practices in integrating technology into the learning environment with their colleagues.
Topics covered in the presentation: 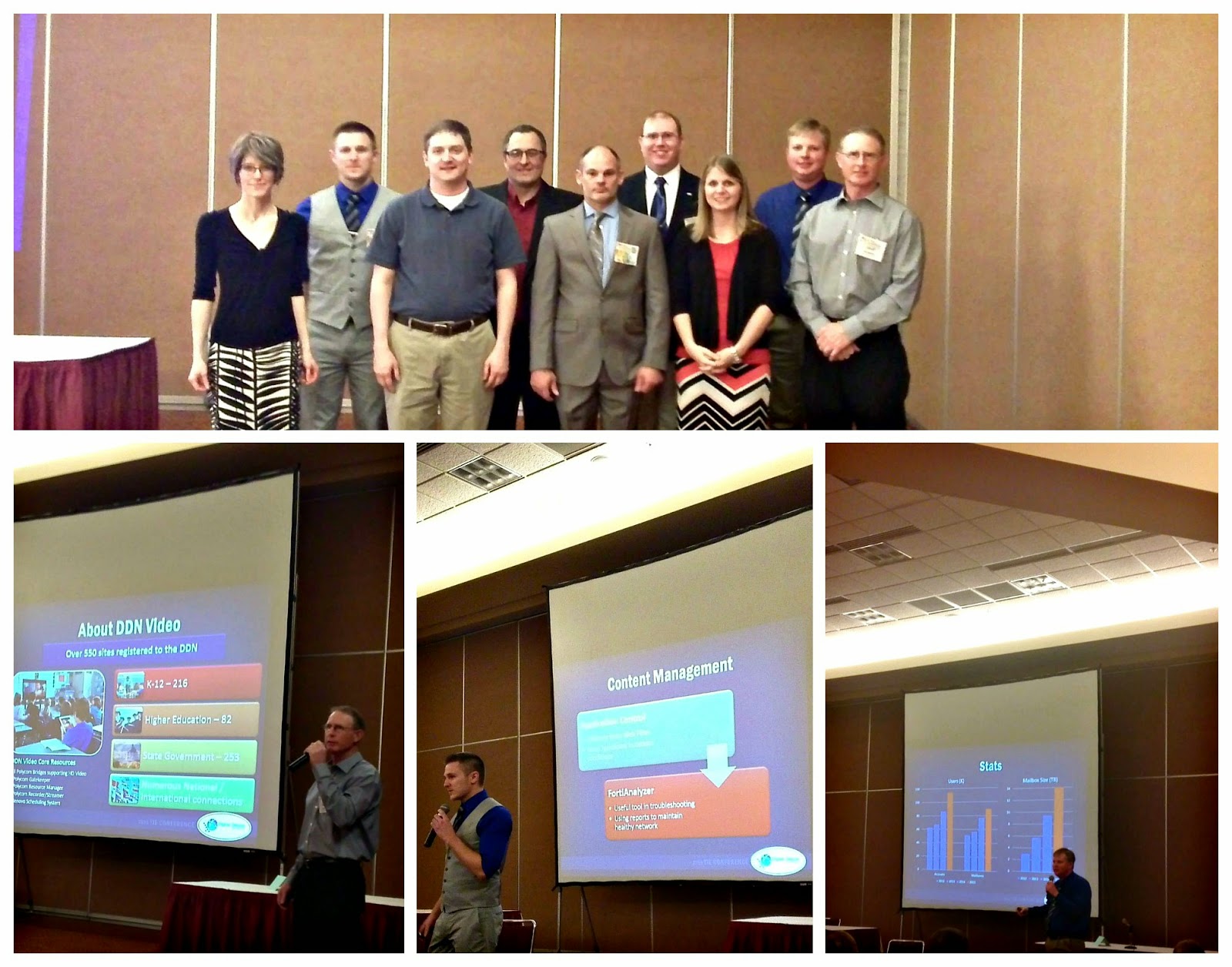