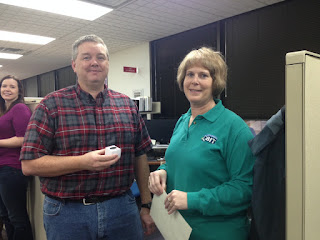 Scott explained that technology has changed since he first started 25 years ago:

“When I first started we used a ‘dumb terminal’ to develop applications. Basically, it is just a monitor with a keyboard that was tied into a mainframe computer. We didn’t use the internet or even PCs. Today, we have applications on our phones that we carry in our pockets.”

When asked his biggest accomplishment to date, Scott cited, “My marriage and children.” (Awwww  🙂 !!)

What’s his advice to the rest of us who have yet to make it to the 25 year mark? “The satisfaction you get is directly related to the effort you give. To keep your job fulfilling for a long period of time you need to be proactive about putting in the effort.”

Scott and his wife Bobbi have a 10 year old girl named Erin and a 9 year old boy name Jacob. They enjoy camping, boating, fishing, and hunting. Additionally, Scott enjoys coaching little league baseball and football. In his spare time you can find him playing catch or an occasional board game or video game with his kids!

Congratulations on your 25 years of service, Scott! Here’s to many more!! 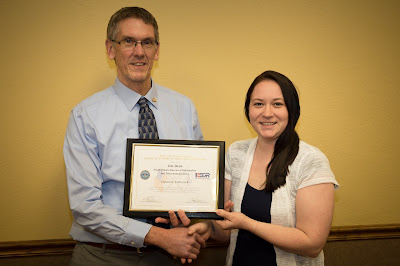 Kala Goetschius, a computer support specialist for BIT, has served as an 88M (also known as a motor transport operator) in the National Guard out of Millbank, South Dakota for almost 11 years.

Recently, Kala nominated her boss, Jim Dean, to be recognized as an employer who supports the National Guard and Reserve. Kala explained, “I have submitted Jim for this because he has stood behind my being in the guard and having to be gone sometimes with little or no notice for drills or other assignments they may throw at me.”

“Although I personally have not served in the military, I come from a family where my dad was a WWII and Korean War veteran in the U.S. Navy; and my brother-in-law, Fred, served in the U.S. Marine Corps. I understand the importance of supporting our military forces.” He went on to state, “It is my belief as a United States citizen that we owe our military servicemen and woman the highest respect and honor for their service and sacrifice to this great nation. It is my honor as an employer in BIT to support Kala as a National Guard member in any way I can by allowing her the necessary time off to attend drills in Milbank and attend summer training exercises. Thank you Kala for your service!”

Jim also added, “During this time I would also like to take a moment to acknowledge and honor others on my team that have served in the military – Dave Ames (U.S. Navy), John Wulf (U.S. Army), and Tony Tibbs (U.S. Navy). Thank you for your service as well!”

Jim has worked for the state for many years and has been with BIT since its consolidation in 1996. He was born and raised in Pierre and graduated from T.F. Riggs High school. Jim is married to Marliss and they will be celebrating their 35th anniversary in March!

Jim has three children: Jennifer, Amanda, and Chris; and two grandchildren: Jacob and Ashlynn. In his free time, he enjoys doing home improvement projects (which he noted never seem to end!), fishing, target shooting, riding his Harley and cheering for his favorite football teams the Green Bay Packers and the Nebraska Huskers!

Kala first got involved with the National Guard her junior year of high school when a recruiter visited her history class. She explained, “He [the recruiter] had just gotten back from Iraq at the time with what is now my unit. He gave a speech and after that I was signed within the next month. Not really sure what it was but I just decided that I wanted to sign so I did at the age of 17.” Kala’s grandpa served in the army for 3 years and she currently has 3 cousins who are currently serving.

Kala is originally from Milbank, South Dakota and has a 6 month old son named Charlie. She attended Southeast Technical Institute in Sioux Falls where she graduated in 2009. Kala loves to play darts and currently serves as the treasurer for the Pierre Area Dart League (PADL) here in Pierre.

Congratulations on your award, Jim! Thank you for your service, Kala!

Technology giant Google develops virtual reality goggles that do not depend on a phone, a computer or console […] 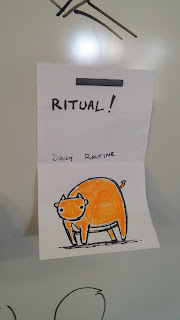 Zach Kantack, Software Engineer on Development Team 1, participated in the Global Game Jam event at DSU last weekend. For those of you who aren’t familiar with the event, it is the world’s largest game-creating event that takes place around the world at different physical locations. At these locations, participants get 48 hours to use their creative talents to design, program, and develop video games. 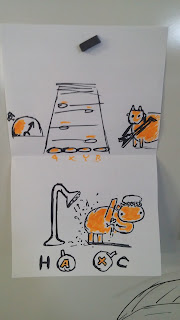 Zach explained that the participants were stuffed in a room with white boards trying to think of something they could relate to the theme “ritual.” He figured people would probably resort to doing lot of demonic-type related things, but he wanted to take a different approach. Zach elaborated, “I thought of all the different children’s pet games there are out there; then I thought ‘what is the most random animal I could pick out and then make someone take care of?’”
It was this thought process that led Zach to come up with the idea of creating a Tamagotchi-type buffalo game that the player would need to get in a “routine” or “ritual” of taking care of;  which he then pitched to the rest of the group. Zach said, “There was a point where I wasn’t sure if the buffalo idea was going to make the cut. When we went around and voted, 11 people cast a ‘maybe’ to the buffalo idea; eventually, 5 people ended up joining my team though.” 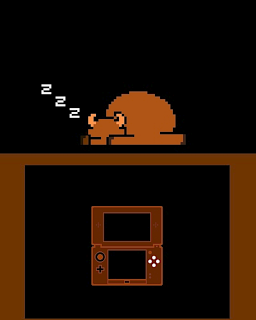 After the five others had joined his team, Zach and his teammates took off for a room and began brainstorming ideas for their video game. To get the ball rolling, Zach drew a picture of the buffalo for his teammates and said, “Here’s the buffalo. Think of every possible thing you could do with it as a pet.” As a result, Zach and his group programmed the game so the player can assist the buffalo with things like practicing the guitar, running on the treadmill, and even picking up buffalo poop! 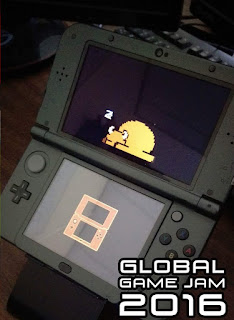 After being awake for 48+ hours straight, Zach and his team ended up winning “best music” for their video game. Zach explained, “The judges called the music ‘addicting.’ It was completely original. I actually contacted a friend to help me with some of it. It was cool to be able to design everything for this game from scratch.”
When asked if he ever considered developing his own games, Zach explained, “I don’t actually know. It would definitely take a lot of work and a lot more than just 48 hours.”
Way to go Zach! Check out the below link to see Zach’s interview with Keloland!
http://www.keloland.com/newsdetail.cfm/dsu-students-beat-the-clock-to-build-a-game/?id=190238 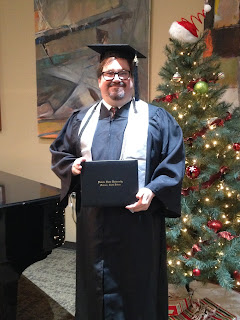 A special congratulation goes out to David Harding for recently graduating on December 12, 2015 from Dakota State University with a Bachelor’s degree in Computer and Network Security with specializations in Cyber Operations and Information Assurance. DSU is one of four schools in the nation that offers classes in computer security. Of those four schools, DSU is the only public university.

David had originally started out at South Dakota School of Mines and Technology where he was double majoring in Electrical Engineering and Physics when the Army called him to attend an Officer Basic Course in Ft. Sill, Oklahoma, forcing him to put his college career on hold.

David and wife, Princess, will be celebrating their 20th wedding anniversary on February 11th! He has two step-children, Armando and Leticia. Armando currently serves as a drill sergeant at Ft. Still, OK and is married with 5 children; Madison, Jaydon, Jace, Austin, Jaxon, and has one on the way! His daughter, Leticia, lives in Pierre and has two children named Damian and Abagail.

Throughout the years, work, marriage, military, and life in general put David’s college plans on the back burner. After his children were grown and he retired from the military, David found that he had more free time, so he decided to go back to school.

When asked what the hardest part about this whole experience was, David explained, “The grand kids missing reading bedtime stories at night. They would get a couple of weeks in between semesters where I could read them their books. I tried to read them my books, but they just were not that into them.”

The most difficult class he encountered was Reverse Engineering. David went on to say that the class was harder than the Atomic and Quantum Mechanics course he had previously encountered at SDSM&T. He described, “Imagine a puzzle that has no edges and solid white color. Reverse Engineering is solving a puzzle finding the source code of a program by examining the assembly language of a disassembled binary file.”

Although some parts brought adversity, David thought the experience as a whole opened a new window of opportunity for him. He explained, “I could not turn a blind eye toward computer security- so why not embrace it? For one thing, I like the challenge. That explore-new-world-feeling in a subject that is extremely scary. And making the Honor Roll twice as a full-time student with a 4.0 GPA.”

When asked if David planned on getting his Masters, he responded “Hmm… Let me think about that… I need some time off from school for a little while. DSU does have a Doctorate program in Cyber Security and I can start from a Bachelors. I am interested, but, looking at the number of credits and the cost? If I can find a scholarship, maybe?”

To top it all off, David was also inducted into the National Society of Leadership & Success. See if you can find him in this picture!

In David’s free time, he serves as a member of both the Society for Creative Anachronism (a living history group with the aim of recreating medieval history) and the Capitol Area Pickleball Association. For those of you who aren’t familiar with pickleball, David explains it as being like “ping pong, but played on a tennis court and with a whiffle ball.” Aside from that, you can find David fixing and cleaning friends computers over a glass of wine or beer.

While BIT is very proud of your accomplishments David, a couple of your coworkers had a few words to say:

“David showed a very focused dedication to achieving his degree through many years of schoolwork. He achieved his goal of a Bachelor’s degree. Congratulations, David!”– Deni Kromarek

“David is the research and analytical mind of our team, always willing to take on challenges that are sure to expand his ever-growing knowledge of the IT field. Going back to school was another one of those challenges that he tackled head-on, and I admire his determination to see his goals all the way through.”– Brian Oakland

“David has brought valuable programmatic and analytical skill to the web administration team, due to his background in development and pursuing education since. He also is a very helpful person that developers and agency users find very enjoyable to work with. The BIT Data Center is happy to have him as a member of our team.”– Tony Rae

Congratulations on your accomplishment, David! BIT is proud of you!