What is an infographic? Infographics are essentially a way to present multiple facets of complex information and ideas in a way that is visually interesting and easy to understand. Often times, infographics are used to keep readers entertained with inf… Okay, so that might be a “BIT” of an exaggeration (pun intended), but in all seriousness Keith is quite the chocolatier!

Recently one of BIT’s very own, Keith Byer, was featured on the front page of the Capital Journal for his homemade confections. Keith explained to the Capital Journal that because he is doing his work on such a small scale, selling small batches would become quite pricey. “On my level, I can’t afford a metric ton of it. I can’t even afford a bag of it. And as soon as I can afford a bag of it, I can cut my prices in half.”

For now, Keith spreads his love by donating his chocolate or bringing it to work for us to try! Last month he participated in a charity fundraiser for Missouri Shores Domestic Violence Center and in the future he will participate in additional fundraisers for the Pierre Fire Department and St. Joseph’s school.

Keith explained while he was at the Missouri Shores event, “I was having fun with that because I was putting it out on boards, and people would take knives and break out a chunk.” Sound familiar BIT family? J

For more information on Keith’s process for making his chocolate, check out our previous blog post: http://bitsocialmedia.blogspot.com/2015/03/life-outside-bit-keith-byer.html 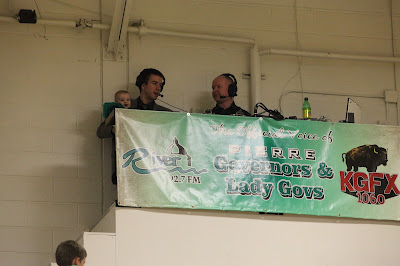 Brian Oakland has worked with BIT for 19 years and currently serves as a Web Server Administrator for the Data center. When he’s not at BIT, Brian does radio announcing for KGFX- where he has announced for almost 22 years!
You may have heard the voice of Brian Oakland on the radio from time to time. It’s possible you’ve even heard him over the lunch hour and then seen him in a meeting 5 minutes later. Although Brian is pretty awesome…. He’s not Superman :).
Brian explained “I usually do weekend on-air shifts, but record them on Friday evenings, or some time over weekends before the shifts are scheduled to begin. If I am asked to fill in for a weekday shift, I will usually record those the night before.” He elaborated, “Recording is still done in the studio. I don’t have any fancy equipment set up in my house or anything.”
He went on to joke, “It’s always funny when someone sees me in public just minutes after hearing me do a radio show on the air. Trying to explain my superhuman ability to literally be in two places at one time (without the help of my twin brother) can be pretty entertaining.”
Brian’s degree in Mass Communications from USD in combination with knowing the station’s general manager for most of his life helped open a door for him to start working at the station part time while in college.
Brian does play-by-play coverage of high school football, basketball, volleyball, and wrestling.  He has also done live on-air broadcasting and even DJ’ed weddings and proms back in the day. The man has done it all! Brian explained:
“It’s the play-by-play announcing that I have the most fun with.  I have a real passion for high school sports, and I have gained a lot of friendships over the years with parents, coaches, school officials, and even student-athletes, who usually have a great appreciation for what we do for them.  Watching the kids grow up before your eyes, from one year to the next, also makes it special.”
When asked if he has any funny stories to share along the way, Brian explained:
“I like to tell the story about how I was a Computer Science major at one time while in college at USD, but I changed my major to Mass Communication.  In an ironic twist of events, my full-time job is now what I turned away from in college, while my part-time job is along the lines of what I earned my degree in.”
Brian’s wife, Jami, works for DCI. The couple has two children: Justin who is a sophomore biology student at the University of Minnesota – Twin Cities and a daughter, Carly, who is a sophomore at T.F. Riggs high school. The family has four dogs and one cat.
In his free time, you can find Brian bowling, playing golf and softball, making casino runs, and taking the scenic route when road-tripping.  His favorite foods include the famous prime rib from the Cattleman’s Club and movie theater popcorn. Brian also coaches youth bowling and softball. In the summertime, you can often find him at the batting cages down at the Oahe Softball Complex, where he serves as a coordinator of volunteer workers.
If anyone is interested in free hitting for yourself or your kids this summer, feel free to get in touch with him! 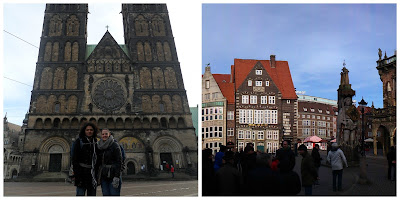 In their last few weeks in Germany, Kaitlyn and Ozzy visited: Bremen, Brocken, Hamburg, and even went over to Prague!

Ozzy and Kaitlyn traveled to Bremen for a school excursion. The couple stopped by the Rath house, which Kaitlyn described as being similar to a city hall. Additionally, the couple scored some free tickets to Brocken, where they were able to go skiing. Kaitlyn explained, “Brocken is the tallest mountain in Northern Germany. It was Ozzy’s first time skiing.” She joked, “Everyone else went snowboarding because it was ‘so much cooler.’” 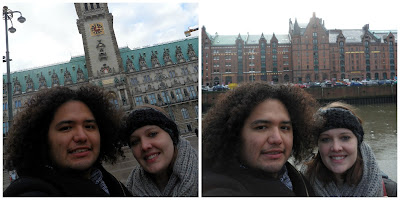 Kaitlyn noted Prague as being one of her favorite places she has visited since she has been in Europe. She explained that the picture taken of her and Ozzy was in one of the most confusing parks in the world. To get to the top of the trail, there is no distinct path to follow – so the walkers end up doing a lot of zigzagging back and forth. She also went on to note, “The people there were really nice.” 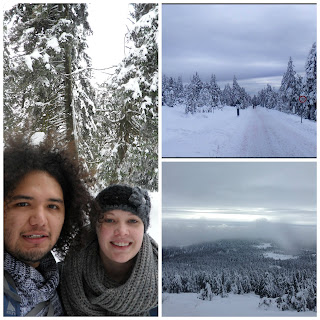 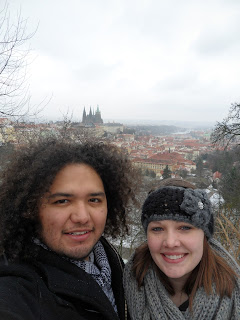 Next time we chat with Kaitlyn, she will be back in good old South Dakota! 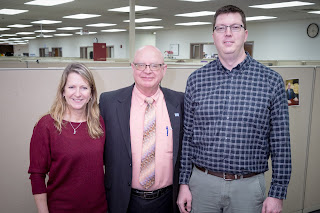 BIT held its first annual Soup-Off on Thursday, February 25th. Many delicious soups, full bellies, and contestants later, two contestants were able to climb their way to the top. 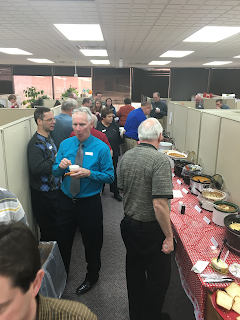 1. Melt 1 tablespoon butter over medium heat. Cook onions and hamburger until hamburger is brown.
2. Stir in basil, parsley, bacon bits, broth and potatoes. Bring to a boil and simmer until potatoes are tender.
3. Melt butter and stir in flour. Combine with milk.
4. Gradually add milk and butter mixture to the soup stirring constantly. Add cheese to soup and continue stirring until cheese is melted.
5. Stir in sour cream and it’s ready to eat! 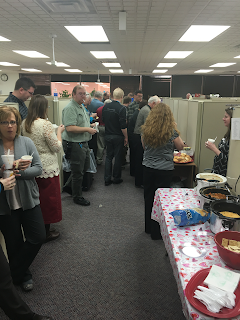 1. Brown sausage in your soup pot. Add Onions and caramelize.
2. Add chicken broth and water to pot and stir.
3. Place potatoes, and garlic in the pot.
4. Cook on medium heat until potatoes a
5. Add bacon.
6. Salt and pepper to taste.
7. Simmer for another 10 minutes.
8. Turn to low heat.
9. Add kale and cream.
10. Heat through and serve.

When asked why they chose to make the soups they did, Betty responded, “I made bacon cheeseburger soup because both my kids loved this soup growing up.” Ryan elaborated, “It’s one of my favorites and isn’t too terribly difficult to make.”

Both Ryan and Betty were shocked to find out that they were the winners of this competition. However, both of them agreed that the camaraderie and taste testing this competition provided was their favorite part!

The morning of the competition Ryan’s son, Alex, asked him if he was going to dress up for his contest. Ryan explained, “We watch some food network shows at home with the boys once in a while and I assume he thought it would be like one of those types of shows. He seemed a little disappointed when I wore regular work clothes to the contest.”

Way to go Betty and Ryan!

Cybersecurity experts make the recommendation for strong, unique passwords for several reasons “ the first being that every day malicious cyber threat actors compromise websites and online accounts, and post lists of usernames, email addresses, and passwords online. This exposes people’s passwords, and worse yet, they are exposed with information that uniquely identifies the user, such as an email address. That means that a malicious actor can look for other accounts associated with that same person, such as work related, personal social media, or banking accounts. When the malicious actor finds those accounts they can try logging in with the exposed password and if the password is reused, they can gain access. This is why unique passwords matter.

When malicious actors use brute forcing techniques they often try every word in the dictionary because it’s easier to remember words than random letter combinations. This technique is not limited to English-language dictionaries, so switching languages will not help. And since many passwords require a combination of uppercase and lowercase letters, numbers, and symbols, the malicious actors rely on human instinct to narrow down the possibilities. For instance, most users when faced with choosing a password that fits these requirements, will pick a word, put the uppercase letter first, and end the password with the number and symbol. Alternatively, many people will replace common letters with a number or symbol that represents that letter. This changes a common password, such as “password,” into the only slightly more complex password of “p@ssw0rd,” which is still an easy to guess pattern.

Another technique to assist in building strong, unique passwords, is to choose a repeatable pattern for your password, such as choosing a sentence that incorporates something unique about the website or account, and then using the first letter of each word as your password. For example the sentence: “This is my January password for the Center for Internet Security website.” would become “TimJp4tCfISw.” This password capitalizes 5 letters within the sentence, swaps the word “for” to the number “4,” and adds the period to include a symbol. The vulnerability in this technique is that if multiple passwords from the same user are exposed it may reveal the pattern. Variations on this technique include using the first letters from a line in a favorite song or a poem.