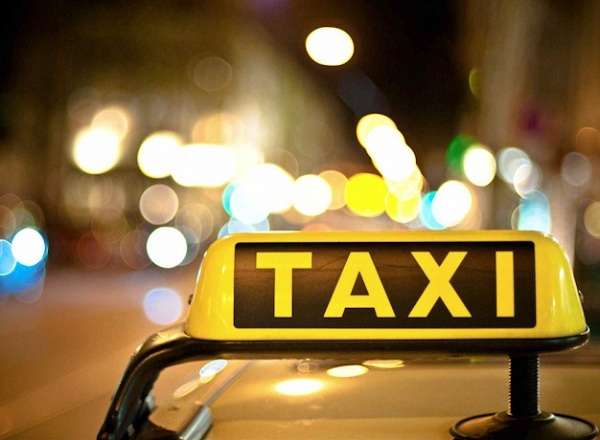 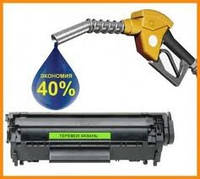 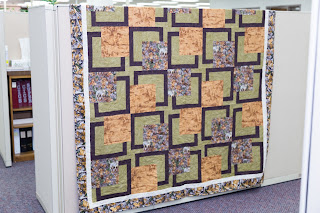 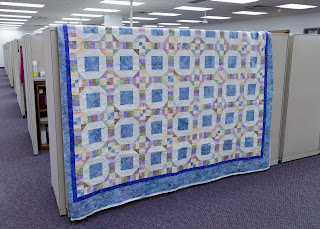 Marcia Graves, a software engineer for Development, began quilting almost 40 years ago when she made a baby gift for her nephew who is about to retire from the Army- and still has the quilt!

It took Marcia about two weeks to make the quilt with the dogs and about a month to make the pastel quilt. When asked what the hardest part of the quilting process was she explained, “Nothing is hard. It takes some effort to get the corners to match but it is so great when they do. The really fun part is hunting for just the right fabric. Sometimes it takes months to find just the right piece!!”

Marcia explained that with her quilts she does the patchwork and has friends who do the quilting; which once again involves finding just the right pattern. She elaborated, “for the dog quilt, the pattern is shotgun shells and for the pastel quilt (I call it Sea Glass) the pattern is called ‘surf’.”

Marcia joked, “I have an artistic side and since a paint brush is a weapon in my hands, I have to find another outlet. I love picking out the patterns and colors and then seeing them come to life in the finished product!”

We look forward to seeing your future creations, Marcia! 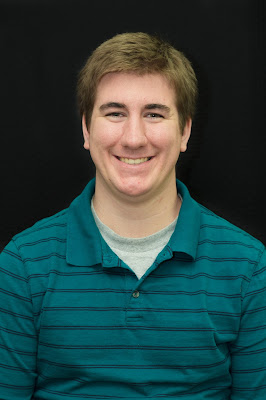 Colin Morris has recently joined BIT as a Software Engineer for Development Team 1. He is a recent graduate from Dakota State University where he majored in Computer Science and Game Design. Colin is currently working on programming the new retirement utility program!

Being a recent graduate from DSU and having this be, as Colin puts it, his first “real world experience with having a job,” he was slightly apprehensive that he might not fit in around here. As it turns out, quite a few of Colin’s fellow DSU graduates are now working for the state as well!

Colin is originally from South Carolina and is engaged. In his free time you can find him playing video games, hanging out with friends, and playing lacrosse.

Welcome to BIT, Colin! We are excited to have you! 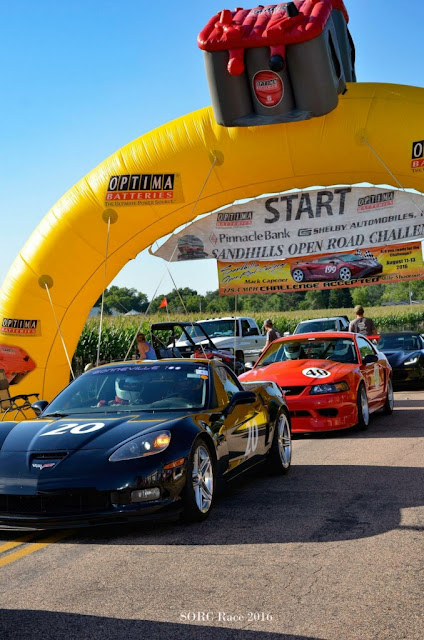 About 15 years ago, Marcia Graves decided to pick up new hobby. What may you ask? Well, drag racing and road racing of course!

Road racing is done on closed public highways with the racers competing to come closest to their own specified average times for the course.

Marcia explained, “I had kids when I was young, so when they all left home I had time and money to pick it up. I have always loved fast cars and have wanted to do it since I was a teenager.”

Since her racing career began, Marcia has used 4 different cars. Two were Ford Mustangs for drag racing and two were Corvettes for road racing. She went on to explain:

“I have to depend on friends to help with the maintenance, so my drag cars are pretty docile – they only run about 112 in the quarter mile. I wrecked my first Mustang at the track and found another. Had a little better luck with the Corvettes, sold the 1st one to finance the second.”

On the weekends when the races are going you can usually find Marcia at the Oahe Speedway participating in drag racing events. Throughout the year she also attends two road racing events, one in Texas in April and the second in Nebraska in August. Coincidentally, Marcia just returned from the event in Nebraska where her 2007 Corvette Z06 did 195.7 mph in the standing mile!

When asked what she likes most about racing Marcia explained, “I love going fast! I am an adrenaline junkie!”

Want to see Marcia in all her glory? She will be at the Oahe Speedway racing on August 27th and 28th and then again on Labor Day weekend! 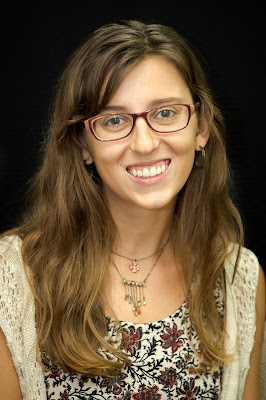 Recently, Casi Popko joined BIT as a Software Engineer for Development Team 1. She will primarily be working in support of BHR. She is originally a local Pierre resident and graduated from SDSU with a degree in Mechanical Engineering and minors in Chemistry, Biomedical Engineering and Mathematics.

After graduating, Casi went on to work as a Mechanical Engineer at IBM Rochester, MN. That job entailed hardware design and software appliances. Before that, she had several internships that incorporated science ideas with software design. She is also partway through an online Master’s program through DSU, Masters of Applied Computer Science, which she will be continuing.

In her spare time, Casi enjoys rock climbing, running, playing board games, and reading. She is looking forward to learning new skills and applying her vantage point to the State.

Welcome to BIT, Casi! We are excited to have you!