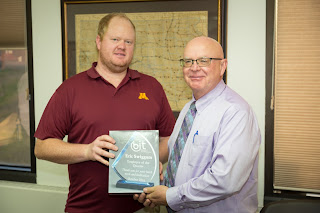 Eric Swiggum serves as a Database Administrator (DBA) focused on SQL database administration and support in the BIT Data Center DBA Team. Eric started with BIT in December 2012 as a SQL Server DBA and quickly learned the ropes in his new position. Eric came to BIT as an experienced technologist with a focus on database technology from the perspective of a business intelligence developer. Included in his background was a diverse knowledge in database technologies outside of SQL Server including IBM DB2, Oracle & Teradata. Eric also had prior experience administrating SQL Server, Informatica and enterprise scheduling software.

Over the past 20 months Eric has been converting workflow packages in SQL Server DTS* (Data Transformation Services packages) to SQL SSIS (Server Integration Services packages), working with developers as needed to get these packages converted. A majority of Eric’s efforts in this work have been focused on converting the legacy Visual Basic 6 script to Visual Basic .Net script. There were more than 450 packages to convert and this was a manual effort. A factor that increased the difficulty of this conversion was coordinating with all the different groups, developers and end-users. At times it was even difficult to find anyone in BIT that was familiar with the legacy DTS packages. Undaunted, he reached out to end users with knowledge of the processes involved to understand the business requirements of the code so that he could be sure to convert it while maintaining its functionality.

*DTS packages are a legacy facility replaced by SSIS packages and there is no automated migration available.

The DTS to SSIS conversion is important as future versions of SQL Server will not support DTS packages. Normally this is the type of work a developer would take care of but development could not spare the resources for this project and the estimate provided by a service provider to perform the migration for BIT was nearly $200,000. Instead of costing the tax payers such a hefty fee, Eric volunteered to apply his development skills he brought to BIT and perform this work himself as time permitted, saving our citizens a tidy sum of money and allowing Development to stay focused on other client engagements. 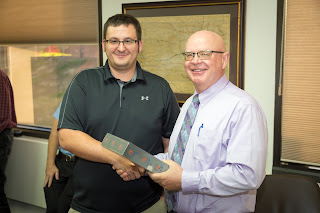 Shawn England serves as a Technology Engineer III for the division of Telecommunications within the Bureau of Information and Telecommunications. Shawn began his journey with state government in September of 2009, briefly left for a couple of years to work for the Pierre School District, and was hired back at BIT in June of 2012.

Shawn’s primary focus as a Technology Engineer III consists of dealing with technology in schools, Fortinet, security, networking, servers, and wireless. About 2 years ago, Shawn proposed implementing a Border Gateway Protocol (BGP), which is a standardized exterior designed to exchange routing and reachability information which amount to autonomous systems (AS) on the Internet.

It was quite evident from the start that Shawn was willing to invest time into analyzing BIT’s current technology as well as researching telecommunications provider technology. This solution came as part of the Communications Transport RFP which included connecting more than 800 sites to the DDN. Shawn evaluated features of network infrastructure hardware which allowed BIT to consolidate the on-site infrastructure from three devices to one. This effort has allowed BIT to save one-time and ongoing costs.

In addition to heading this effort, Shawn has stepped into a leadership role in the security and network areas within the last year at BIT. Shawn is easy to work with and always willing to help, making him a perfect candidate for the employee of the quarter award.

Outside of work, Shawn enjoys playing trombone, shaving “old-school-style” with lather and a brush,

and bicycling. He can also be found building cardboard box forts with his daughter, Bentley, drinking cold brew coffee and discussing school politics. 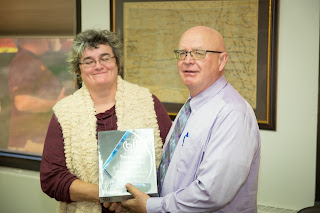 Susan’s primary day-to-day responsibilities include development and support of several DOT applications. One of these is the Concept To Contract (C2C) app, which tracks construction projects from the cradle to the grave. If there’s a DOT construction project in progress, planned, or even completed many years ago, Susan can locate the associated information.

In the fall of 1986, Susan graduated from SDSM&T as a computer science major and became a full-time DOT application developer. This was also around the time the IBM 286 PC (with an actual hard drive) first hit the market. A hard drive was pretty high tech, so she settled with a machine with dual floppies instead.

Susan kept up with the ever changing application development landscape over the years. She started programming in Natural and COBOL, but moved to the cutting edge to develop apps using dbase and DOS commands. Some of her original systems have made the transition from dbase to Access and then to SQL.

While Susan may write or review code once in a while, her main focus over the last few years has been as an analyst and project manager. Understanding the client’s business needs, personalities, and workflows allows her to excel. Many times, she understands the application and workflows better than the people utilizing or requesting the application.

Recently, Susan has acquired the role of scrum master. The scrum master is the facilitator/coach of a team of developers that utilize the scrum development methodology for creating applications. Her most recent Scrum development project is an Environmental Tracking System for DOT. Even though resources have been pulled from the project, she still manages to keep the project pointed in a positive direction.

Susan grew up in Tolstoy, SD–go Greyhounds!–and still spends many weekends there with her mother and other family members to lend a helping hand. She also enjoys reading, cooking, gardening, crocheting, and the occasional cross stitch.

Congratulations Eric, Shawn, and Susan! BIT is happy to have you!

How do attackers target online shoppers?

How can you protect yourself?

In August of 2016 29% of state government employees failed an authorized internal phishing. Nearly 30% of the set of employees tested clicked on a fake link that could have downloaded malware to their computer or compromised it in some manner. This is a serious problem!

The magnitude of this failure indicates we need to increase efforts to educate and inform employees of the significant risks associated with a simple email message. In a typical month, state government receives nearly 10 million email messages, of which over 80% are identified as spam or malicious and are automatically blocked. 8 million are blocked by technical processes! But our automated defenses are insufficient to block all nefarious messages. It is imperative that every employee with an email box be consciously aware of a message before clicking on it and any contents within or attached to the message. The phishing threat occurs within state government every day!

Yes – a simple email message can put at risk all of that confidential data entrusted to us. We must be smart with every message we receive.

Phishing is defined as sending a malicious electronic communication, e-mail, text, etc., and is recognized as the most common attack vector in cyber-crime today. A variation of phishing, spear-phishing, is a more targeted phishing attack aimed at specific organization or group of individuals. The attackers research the organization, seeking names of departments and managers, and use this information to construct emails which appear to be legitimate and authentic.

The very recent data exfiltration’s from the Democratic National Committee and presidential campaign are rumored to have been initiated with a Gmail phishing message. Once the foothold from downloaded malware or compromised credentials is achieved, hackers can ‘leap frog’ from computer to computer looking for valuable data.

Whaling, yet another form of phishing, targets high-level executives with more focused and topically-researched malicious emails. State government has experienced very specific whaling messages being delivered to senior level departmental executives within the past month. Again, the threat is at our front door.

Please, be particularly wary of unexpected emails relating to local, national, and world natural disasters. Hackers frequently use headline-causing events as the subject of their malicious emails, seeking to capitalize on people’s curiosity and empathy. They will construct messages that appear to originate from a charitable organization, but the only people they are interested in helping is themselves.

Telltale signs of a potential phishing email or message include messages from companies you don’t have accounts with, spelling or grammatical mistakes, messages from the wrong email address (e.g. info@yourbank.fakewebsite.com instead of info@yourbank.com), generic greetings (e.g. “Dear user” instead of your name), and unexpected messages with a sense of urgency designed to prompt you into responding quickly providing you no time to verify the information. “Resume” and “Unpaid Invoice” are popular attachments used in phishing campaigns.

Easy tips to protect yourself from phishing: