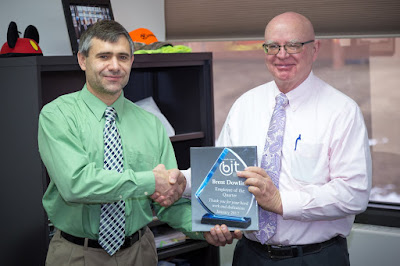 Brent currently serves as the Technology Architect for the Data Center Integration team. Brent has been working for the State since June of 1996, starting with Computer Support Services servicing Windows desktops. After two years of desktop support, Brent became one of the charter members of the BIT Integration Team along with Pat Snow and David Smith. After working for several years as a team member of the Integration Team, Brent became the manager of the Integration team in 2004. In 2012 when the Technology Engineer banding was put in place, Brent was able to benefit from the new options that opened up and chose to accept the job role of a TE5, otherwise known as an Architect role. (Not to be confused with the same role in the movie series, The Matrix. J)

Over the years, Brent has become known for his flexibility and tenacity when it comes to understanding/implementing new technologies and solving problems with those technologies. Brent seems to thrive on a good challenge, coming up with ideas and solutions under tight time-lines. One of Brent’s most recent endeavors along these lines was to help research, choose and implement a multifactor authentication software to satisfy IRS (and other federal agencies) requirements. The timeframe from start of the multifactor project to implementation has been on a very aggressive schedule.

Other accomplishments of note are:

Brent grew up near Draper, SD on his father’s ranch and farm. He attended high school at Jones County in Murdo. He attended Dakota State University on a track scholarship and obtained a BS in computer science in May of 1996. In fact, if you care to look, Brent is still listed in the track and field records book at DSU. http://www.dsuathletics.com/f/0/6/Mens_Track/Outdoor_Records.php

Brent currently lives in Pierre with his wife, Donna. Brent and Donna have two children, Courtney and Justin. In addition to his duties at BIT, Brent is also part-time farmer. He partners with his father and brother in the farming operation. 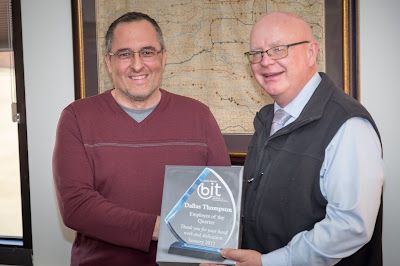 Dallas Thompson serves as a Technology Engineer III for the Division of Telecommunications within the Bureau of Information and Telecommunications. Dallas began his journey with state government in March of 1994.

Dallas’ primary focus as a Technology Engineer III consists of dealing with technology in schools, network operations, networking, and telecommunication circuits. During the summer of 2016, Dallas was the project manager for the network upgrades. The upgrades came as part of the Communications Transport RFP which included connecting more than 800 sites to the DDN.

Dallas is easy to work with, remains flexible with his workload and schedule, and is always willing to help, making him a perfect candidate for the employee of the quarter award.

Outside of work, Dallas enjoys fishing, hunting, camping, and woodworking. He also enjoys spending time with his five grandchildren. 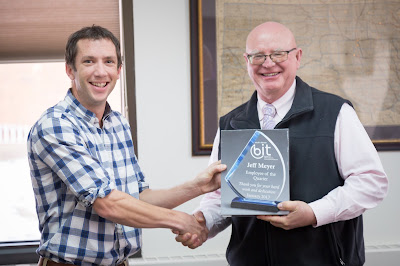 Jeff Meyer has made Development’s goals of measured improvement possible. His initial work on the Work Tracking System WoTS project, his creation of a data warehouse during the second release, and his leadership in the integrations and data quality work with the Develop Managers has been absolutely pivotal to pushing the division through the uncertainty to a point where it can begin ACTUALLY improving.

He has done all this work on top of attempting to make the architecture review process meaningful. This has required him to lead difficult conversations with management and staff who, honestly, would rather the process just be another paper dragon – meaningless in real life. Rather than alienate people, Jeff has taken it upon himself to engage even his most onerous competitors on their grounds rather than simply call them “wrong”.

Jeff has taken a great deal of risk, and has delivered in spades during difficult and chaotic times. His continued support and drive will be pivotal to our own continued gains.