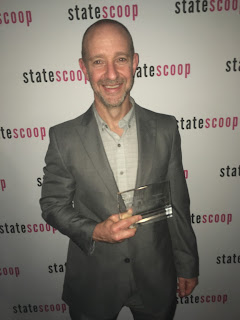 Pat Snow was one of eight state information technology leaders whose efforts were recognized by the industry magazine State Scoop Sunday evening at the mid-year conference of the National Association of State Chief Information Officers being held in Washington, DC.

Each of the eight was individually recognized and presented with the prestigious State Leadership of the Year award. In comments following the award ceremony Pat thanked those who had nominated him for the award and the many peers who had voted for him, saying, “It is humbling to be recognized by those whose efforts I respect and admire. I thank all who felt I was worthy of this award.” 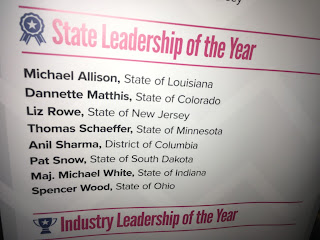 The award ceremony was witnessed and reported to Pat’s friends and peers in South Dakota by Jim Edman who commented “Pat richly deserves this award. Within South Dakota his understanding of technology and his leadership are widely respected. It is a heartwarming testament to Pat that his peers around the country also recognize and respect the quality of his efforts”. While absent from the gathering, David Zolnowsky noted “Pat is an outstanding technology leader, with a discriminating eye for assessing new or evolving technology innovations. As suggested by this award, his counsel is sought by many.”

Congratulations, Pat! BIT is lucky to have you!