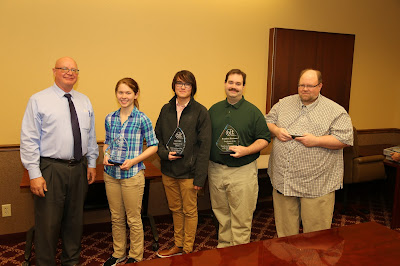 On a quarterly basis, BIT recognizes staff in honor of their outstanding performance and dedication to our agency, state government and the citizens of South Dakota. This time around, we gladly recognize:

Brandon has been a software engineer for BIT Development for approximately 11 years. He serves many roles for Development, but his primary role has been supporting the RV23 CEDAR (Capitalizing on Efficiency and Data Accelerating Revenue) system for the Department of Revenue (DOR). Brandon was part of the team that originally created this very complex accounting-based system that accounts for the majority of the tax revenue collected by DOR.

This past year Brandon redesigned and rewrote what was formerly the Sturgis Rally application. He remade and expanded it so that both desktop and iPad application functionality is directly interactive with the central office CEDAR system to allow for real time processing of data.

Brandon also streamlined the GIS processing and designed this application to be functional for all “Special Events” around the State such as the State Fair, Rapid City Stock Show and Rodeo, Brookings Art Festival, etc. This application allows DOR staff to take their devices on-site at these events and have real time processing of tax data. This application recently was chosen co-winner of the 2017 FTA (Federal Tax Administrators) Award for Technology.

Brandon was selected as Development’s Employee of the Quarter for not only his accomplishment with this application, but also his dedicated commitment to both BIT and the agencies he supports.

Brandon tends to be a soft-spoken and reserved individual. His recent involvement in a variety of applications has led not only BIT developers but other agency users to discover his talents and skills. Brandon openly assists other developers and is a positive resource for BIT.

Christen Hahn serves as a Technology Engineer II for the Division of Telecommunications within the Bureau of Information and Telecommunications. Christen began her journey with state government in June of 2016.

Christen’s primary focus consists of application security scanning, log analysis, email/spam analysis, forensic analysis and working with vendors and Points of Contact on a regular basis regarding application security scanning. During 2016, Christen completed 106 security assessments. She also developed and oversees the State’s phishing assessments performed on a monthly basis with the purpose of raising awareness and enhancing education regarding multiple phishing schemes.

Christen grew up in the Sioux Falls area. She graduated in May of 2016 with a Bachelor’s Degree in Cyber Operations and a Master’s degree in Applied Computer Science from Dakota State University.

In her spare time, she plays soccer and enjoys time with her feline companion, Spice!

During her short tenure in State Government, Christen has helped develop and launch the State SOC (Security Operations Center) with great success. She looks forward to a long and exciting career with BIT.

Ben grew up in Bangkok, Thailand. He pursued a career in Computer Science graduating in May of 2016 with a Bachelor’s Degree in Cyber Operations from Dakota State University.

In his spare time, he is an avid video game player and music enthusiast.

Ben has helped develop and launch the State SOC (Security Operations Center) with great success. His vision for the State’s cyber security standing is to have security measures in place for all systems to truly have a solid cyber security posture in the nation.

Reed started his career with the State of SD as a computer operator in the BIT Computer Room in 1997. When a position opened up on the Data Center Systems Team in 2006, Reed applied for and was accepted to fill the position where he would soon become responsible for customizing and administering a number of mainframe products that he had utilized while an operator.

Over the past ten years, Reed has continued to take the initiative to broaden his skillset to the point where he now provides primary support for a number of mainframe products and systems including printing, tape handling, batch scheduling, electronic output, and the network monitoring and message automation products. Reed’s other responsibilities include backup administrative duties for a number of systems that extend beyond the mainframe architecture including such diverse areas as IVR (Interactive Voice Response) Systems, file transfer mechanisms, resource billing, and mainframe disaster recovery.

While continuing to act as the administrator for an increasing number of products, Reed recently accepted project management responsibilities for a couple of complex projects. In the summer of 2016, he successfully managed the roll-out of a version upgrade for the State’s mainframe job scheduling system, CA-7. This upgrade was implemented ahead of schedule and without disruption to clients. More recently, he is days away from wrapping up a multi-year project tasked with replacing a number of mainframe print processes which have been in place for multiple decades with more current processes and hardware. In both cases, agency representatives and coworkers on the project teams have commented positively about Reed’s willingness to accommodate changes while continuing to keep the projects on track and on schedule.

Reed currently lives in Ft. Pierre with his wife, Gena. Reed and Gena have one daughter, Breanne. Outside of work, Reed enjoys reading, music, and woodworking.

Congratulations Brandon, Christen, Ben, and Reed! BIT is luck to have you!